Does Urinary Incontinence Caused by Pregnancy Go Away? 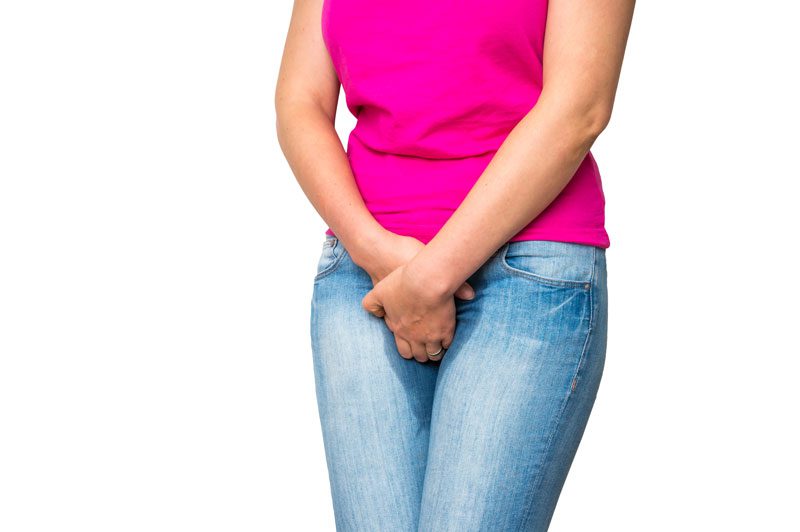 How Common is Pregnancy-induced Urinary Incontinence?

Many women experience involuntary leak of urine towards the second and last trimester of pregnancy. The leaks occur with sudden exertion during coughing, sneezing or running. At the outset, it can be scary to lose control of a private body function for no apparent cause. Soon they become daily annoyances.

As many as 1 in 2 adult pre-menopausal women may complain of stress urinary incontinence. Of these incontinent women, more than 60% attribute their condition to pregnancy, childbirth or post-delivery care.

During pregnancy, the prevalence rate of urinary incontinence rises up to 55%, compared to the incidence rate of between 20% and 40% in non-pregnant women. Dr PK Sands (USA) analysed stress incontinence in a cohort of 173 pairs of identical twins, designed to eliminate differences due to genetic factors. He reported that in twins who had vaginal deliveries, 67.1% had stress leaks, compared to 47.7% in twins who had Caesarean sections, and 24.0% in twins who had never been pregnant (refer to Chart 1). This was consistent with other observational studies. The consensus is there are higher rates of incontinence after vaginal birth versus Caesarean section, which had lower but not zero rates of incontinence. 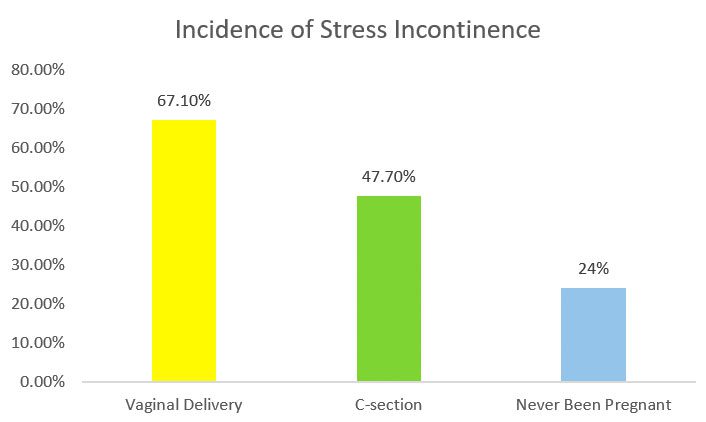 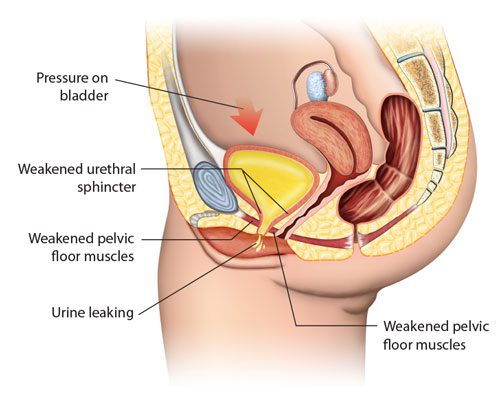 Why does Pregnancy Cause Urinary Incontinence?

Pregnancy and mode of delivery are indeed major determinants of urinary incontinence risk among younger adults. The passage of the baby through the pelvic floor during vaginal delivery and giving birth multiple times are important factors.

Earlier ultrasound studies identified a shift in the position of the urethra (urine pipe) and bladder neck position after childbirth.  This suggested that as the baby comes through the birth canal, it effectively dislodges the urethral complex from the originally well-supported level.

A 2018 report highlighted that pregnant women who were carrying the second or more child, who are older than 35 years old, and who are overweight, have higher chance of developing urinary incontinence during the pregnancy. Repeated pregnancies and deliveries injure the nerves, connective tissue and pelvic floor muscle cumulatively, thereby reducing the urethral closure pressure and making it easier for women to leak. Likewise, older women may have weaker urethral sphincter due to increasing laxity of the ligaments and poorer muscle tone. With excessive body weight, the abdominal pressure in the pregnant woman is higher, which then translates to higher bladder pressure and easier urine leak.

Does Incontinence Go Away after Pregnancy?

About 50% of pregnant women develop temporary urinary incontinence, and at 3 months after childbirth, the incidence goes down to 10%-30%.  When assessed 5 years after delivery, 92% of women who were still leaking urine at the third month post-delivery reported relapse of incontinence.

In Jan 2012, a survey across seven administrative regions of China and involving 10000 pregnant women, found that prevalence of urinary incontinence was at 26.7% in late pregnancy, 9.5% at 6 weeks after delivery, and 6.8% at 6 months after delivery. 3.7% of women who did not have urine leak in late pregnancy developed urinary incontinence at 6 weeks post-delivery and a further 3.0% women developed incontinence at 6 months post-delivery (Refer to Chart 2). This later onset of urine leak that occur after childbirth is certainly attributed to the pelvic floor stretch and pudendal nerve injury during labour and the subsequent change in the pelvic organ position. Most cases recover after 6 months to a year.

Chart 2. Rates of Urinary Incontinence During and After Pregnancy 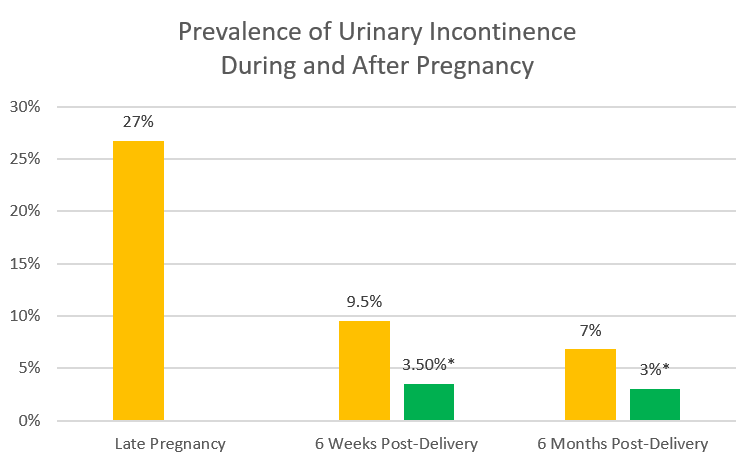 The Chinese survey highlighted that continuing urinary leak was linked to these women staying in rural areas (probably due to early resumption of physical work in the rural setting), frequent exercises and birth-related injuries. Other studies have correlated non-recovery from urinary incontinence to greater body built, larger babies delivered, pre-natal constipation, sphincter tear and having urinary incontinence during the pregnancy.

What are the Options for Incontinence Treatment?

1. Pelvic floor muscle training, also known as Kegel exercise, has been the primary non-surgical treatment for stress urinary incontinence over the past 30 years. Studies in the nineties endorsed its effectiveness. Amongst women who suffered urinary incontinence after childbirth, those who did Kegel exercise would be 40% less likely to have the problem at 12 months after delivery. 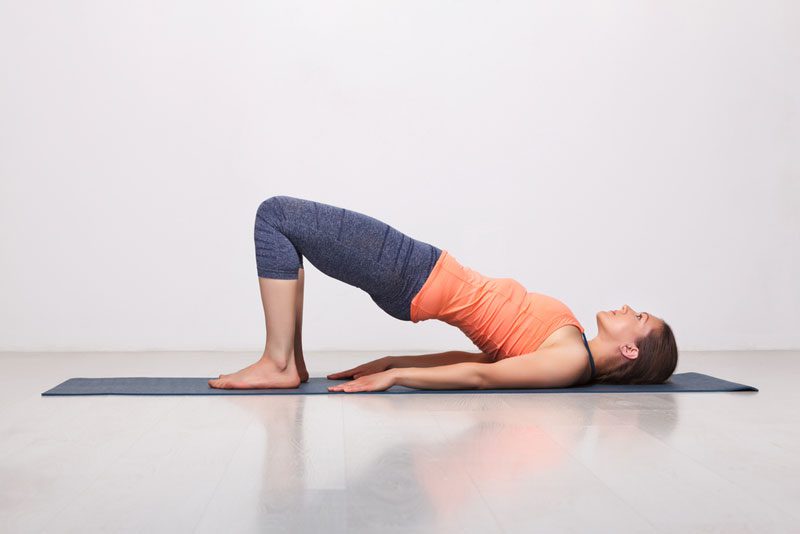 It came as a surprise when a 2013 research paper described the failure of post-delivery Kegel exercises to reduce the rate of urinary incontinence 6 months after delivery. This was a European randomised controlled trial conducted by reputable physiotherapists, who were leaders in the field. Nevertheless, women with mild stress incontinence are still encouraged to undergo a well-designed pelvic floor rehabilitation protocol as a first line, to optimise muscle tone recovery.

2. Vaginal laser treatment has emerged as a non-drug and non-surgery option to manage urinary incontinence. In the last two years, the Mona Lisa Touch CO2 laser therapy has surfaced against the multitudes of critical denouncement. Doctors in Europe and Central America have gathered evidence to show that laser treatment is efficacious. In directing the fractional laser pulses into the dermal layer of the vaginal skin, a thermal effect at 60-70 degree Celsius is established. The heating of the fibroblasts (cells) and the interstitium in the vagina stimulate new collagen formation by the cells, and remodelling of the existing collagen fibrils in the ground substance. The resulting firm tissue integrity around the urethra and bladder improves the closure mechanism of the urethra, thereby reducing urinary leak.

3. Surgery remains the definitive treatment for moderate to severe stress urinary incontinence. This is far and few among those who had recently delivered. The recent furore against the mid-urethral slings is a knee-jerk reaction to the lack of patient understanding. The attending gynaecologist has to manage patient’s expectation adequately before selecting the appropriate surgery. 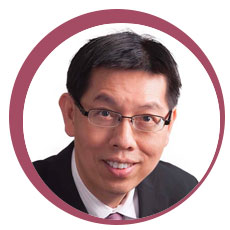 About Author
This article is written by Dr James Lee, an gynaecologist with experience in the areas of urogynaecology and pelvic floor dysfunction in women. He is currently practising at Astra Women’s Specialist (Novena, Bishan, and Punggol).